The indicators selected to measure whether we are a community that is safe, just and engaged are the overall crime rate, whether people of different races are disproportionately booked into jail, and voting. 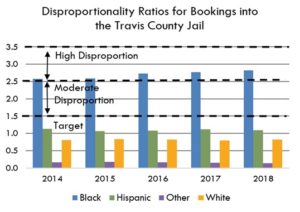 Arrest disproportionality has been stubbornly persistent for Black residents of Travis County. While Black residents account for 8% of the total adult population in Travis County, 23% of all people booked into the Travis County jail are Black. A recent report by the Urban Institute and the Center for Policing Equity finds that Black motorists are four-times more likely to be arrested after being stopped by the Austin Police Department as White motorists. This problem is not unique to our community, and solving it will require collaborative action.

The poverty rate for all races and ethnicities has declined since the end of the Great Recession, however, disparities remain. Poverty rates for Travis County residents who are Black or Hispanic are about 2.5 times greater than the poverty rates for Whites. Less than one-tenth of White residents live below the poverty level. , which is about $25,000 for a family with two adults and two children and $20,000 for a family with one adult and two children. As the graph at right shows, the disparity for children is even greater. Nearly one-third of all Travis County children who are Hispanic or Black live in poverty. High rates of child poverty indicate this is an issue that requires greater support for families.

People who are Black are over-represented in the local population experiencing homelessness. Although the Black population makes up 8% of the total Travis County population, 37% of the homeless population identify as Black, which indicates a high level of disproportionality (i.e., the rate of homelessness for Blacks is 4.6 times greater than what one would expect given racial/ethnic composition of Austin/Travis County). 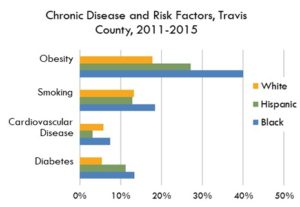 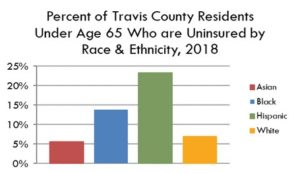 Black residents are over-represented among those who smoke, those who are obese, and those reporting poor mental health. There are life and death consequence to these health disparities. According to Austin Public Health,  Black residents also have the highest rates of cardiovascular disease and diabetes—diseases more prevalent among those who are overweight or obese. Health disparities by income are even greater than disparities by race or ethnicity for mental health, smoking, and those with no health insurance.

In Travis County, 26% of all people under the age of 65 who are low-income have no health insurance. This is almost twice the rate overall. Hispanics are more likely to be uninsured than people of other races and ethnicities. According to the Texas Behavioral Risk Factor Surveillance System, 23% of Hispanics under the age of 65 are uninsured. Much of the overall increase in the number of people who have health insurance is due to implementation of the Affordable Care Act, which is not available to people who are undocumented. 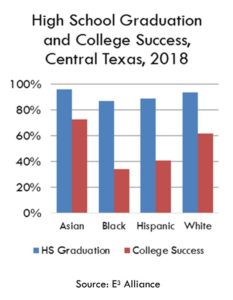 As the graph at right shows, the disparities in high school graduation rates are smaller than the disparities in college success. For the high school graduating Class of 2012, about 34% of Black students and 41% of Hispanic students who enrolled in a Texas college completed a post-secondary credential by 2018. The college success rates for Whites (63%) and Asians (73%) were much higher. Even though college success rates for Hispanic students are low, they have improved from 35% to 41% over the past five years.